We are hard at work here in Altagracia! 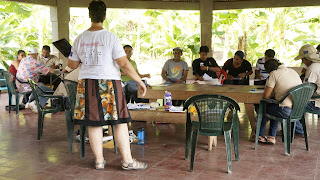 We had our first workshop on Tuesday, 28 June, with 18 guides attending. When we asked a couple weeks ago about what topics they wanted, we heard loud and clear that they wanted to know about "La Cultura Turistica," or tourist culture - basically, what do tourists want?

We discussed a lot about professionalism, and cultural differences between Europe, the US, and Nicaragua. Stereotypes and exceptions to stereotypes, machismo and sexism, being there to assist vs. harassing passersby - there was a lot to discuss. These guides are somewhat self-selected, of course, so those who attend trainings are often already aware of cultural differences. But some things die hard. For example, at the end of the workshop, they wanted to ask one of the female guides to serve the juice and donuts provided. That made for a teachable moment about  how in the US, it would be unethical to specify that they want a woman to do the serving in a work setting. So they put the question out there, and of course the women volunteered. But at least there was a discussion!

Another repeat visitor to the island who had toured with Arlin, the president and founder of the group, had come back with five pairs of quick-dry hiking pants as a donation. They drew names from a bag to choose who got them, and the winners were pretty happy: 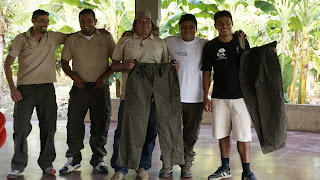 We are also working with the kids at the before- and after-school care center of the project Si a la Vida, who talks to teachers to select students who are at risk of falling behind, or have a particularly tough home life, or learning deficiencies of some sort. Our contribution is to teach some environmental education classes like we do in the US. We're pretty surprised at how well they work here. 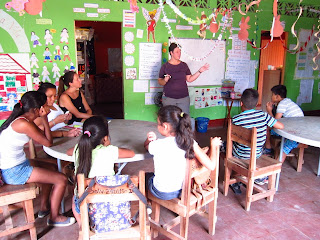 The kids have so far drawn habitats for birds, played a memory game of local bird species, and talked about the food web of the lake. Jeff's food web demonstration, for example, had them jumping up and down to give examples of animals that might eat an insect, and then animals that would eat that animal, etc. 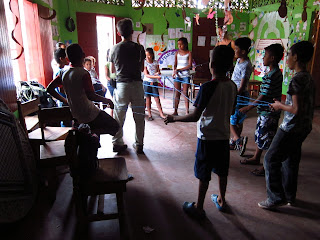 It is always nice to get that kid time. Not only does it rejuvenate the environmental educator in both of us, but it's great Spanish practice. Kids are so willing to correct mistakes without any self-consciousness or worry that they'll offend. And they get excited about *everything*.

Soon, our friend and coworker in the Everglades, Jen Lopez, is coming to visit for about a week and a half. We'll be putting her to work, for sure.