One of our big goals in our Guias Unidos project was to perform guide training workshops. We haven't written a lot about this yet, but we've been busy with workshops and other projects. In August we set up a pair of interpretive method training workshops--The basics of presentations one day,
and then practice presentations on a separate day. Kate and I both came down with the zika virus (not officially diagnosed, but extremely likely according to our symptoms) in the middle of our workshop series. Kate was bedridden with an intensely-itching, full-body rash and some aches.
I (Jeff) got a light rash with aches and swollen joints. Kate couldn't even wear clothes, so since I was just sore but decently attired, I completed the workshops on my own. I admittedly did not do a good job, but we were on a tight schedule. I hooked them up to microphones and filmed their talks so that we could watch them later, when we would be in a better state of mind.

As soon as we felt better, we had to go to Costa Rica for our visa run and to visit the projects we had planned (see our previous blog post).

After returning to Ometepe, we got back to teaching.  We did a couple birding workshops in the field, one taking place at Charco Verde, and the other at Peñas Incultas, both popular birding and hiking spots. Some of the guides were experienced, and others were complete beginners with birding. We did a basic intro on how to use binoculars, how to use bird books, then we went out for a couple hours and helped each other out with identifications.
Each day we were able to identify 25-30 bird species. This would not have been possible without your donations and the grant from Idea Wild that supplied us with binoculars and books. Thank you to everyone!
Although we've been busy, we've tried to help Arlin with his free English classes for the kids of Altagracia.
We co-taught a few classes (though Arlin is doing most of the work), and we took the kids on an environmental education outing one weekend. We looked at birds, bugs, and monkeys,
And we made animals in the sand at the beach.
Both English skills and environmental awareness are important skills to have in this area where ecotourism is a growing economic force. So we applaud Arlin for this endeavor, and we hope to support the classes more next year.

We also took a day trip with the folks who work at the Finca (Farm) Si a la Vida (where we live now). We visited Finca Bona Fide, the permaculture farm where we worked 3 years ago. We bought a few plants and we’re going to use some of their techniques on our farm's volunteer housing area.
Next, Kate put together a Geology 101 workshop after spending nearly a week studying her favorite subject. Kate also spent a day preparing with a local Peace Corps Volunteer (Thank you Lindsay!) who is a geologist working on local risk maps for our volcanoes. Kate gave us a basic intro, geology 101, took us out on a "timeline of the earth" walk,
then gave us a nice slide show about some local details of the geology on Ometepe (Thank you Angelica from Fauna and Flora International for lending us the projector!).
We also put together a short video of some of our experiences this summer and watched it with the guides. I hope to make a better one when I have more time and a better processor, but you can see what we put on Youtube:

For our last week here, we have one more workshop planned: first aid kits, but we’ll tell you more about that next week.

Since I don't have a good conclusion, let's just end with a picture of our farm's newest addition, a puppy named Duquesa (Duchess)! She's cute, and she now officially likes our hammocks! 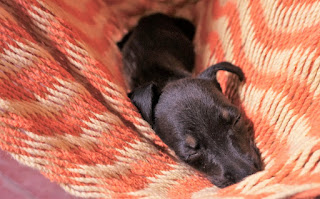